This is a great announcement as Dudman is an incredible voice actor. I think fans will be very pleased with this one.

BBC Audio and Demon Records have announced that they will be publishing a brand new Doctor Who audio story for the Tenth Doctor as part of the Time Lord Victorious multi-platform adventure. Doctor Who: The Minds of Magnox will be released on CD and digital download by BBC Audio on 3rd December and will be released on vinyl by Demon Records on 4th December, marking the first simultaneous publication of a BBC Audio title across CD, digital and vinyl formats. The CD and digital editions will also feature a short Coda to the story.
The audio story is available to pre-order on Amazon and Audible now and will be available to purchase globally.
In this original story, the Doctor travels with Brian, the Ood assassin, to the planet Magnox, one of the greatest receptacles of knowledge the universe will ever know, and home to the Minds of Magnox. The Doctor needs to ask a vital question, but the answer is Grade 1 Classified. In order to gain an audience with the Minds of Magnox he must take a dangerous test.
Meanwhile, Brian gets involved with a criminal group and is asked to assassinate the Minds of Magnox. However, others also have the planet within their sights…
Doctor Who: The Minds of Magnox is written by Darren Jones and narrated by Jacob Dudman.
Darren Jones has written several previous Doctor Who stories for BBC Audio, including Doctor Who: Paradise Lost, Sleepers in the Dust and The Eye of the Jungle.
Jacob Dudman has previously read Doctor Who: Paradise Lost for BBC Audio, and has recently starred in Netflix’s The Stranger alongside Richard Armitage.
Michael Stevens, Doctor Who Range Editor for BBC Audio, said: “We’re delighted to tell this part of the epic Time Lord Victorious story, which is a unique and thrilling adventure for us all. Darren Jones has created the world of Magnox for the Tenth Doctor and Brian to visit, and Jacob Dudman brings it to life pitch-perfectly.” About Time Lord Victorious:
Time Lord Victorious is a multi-platform Doctor Who multi-platform adventure in which partners including Penguin Random House, Doctor Who Magazine, Titan Comics, Escape Hunt, Big Finish Productions, Eaglemoss Hero Collector, Immersive Everywhere, Maze Theory, Demon Records, BBC Books and BBC Audio, unite to tell a brand new Doctor Who story.
Launching in Autumn 2020, Time Lord Victorious will tell a new and untold story, set within the Dark Times at the start of the universe, when even the Eternals were young. Following several Doctors across space and time as they defend their home planet from a terrible race, this is a story like no other.
The story will feature the Eighth, Ninth and Tenth Doctors, companion Rose Tyler and monsters including the Daleks and the Ood, with more revealed over the coming months.
Further information about Time Lord Victorious can be found on DoctorWho.TV, where a timeline of product releases will be collated as products are announced.Bibliographic information:Pre-order links CD and download:
Amazon: https://amzn.to/3gz6P7h
Audible: https://adbl.co/2Z3qkPs

Stranded in Victorian London, a Zygon becomes the centerpiece of a seedy freak show. Weak and confused, the creature becomes coddled by showman Jethro’s daughter, in a state of deranged grief over the loss of her stillborn child. Nick-named Bobby, the Zygon is seen only as an opportunity for monetary gain. A member of high society attempts to purchase the oddity from Jethro with no luck.

Greatly influenced by the plight of Joseph Merrick (aka the Elephant Man), the Zygon named Demeris survives the indignities heaped upon him by the dregs of humanity. Unlike Merrick, however, the Zygon vainly attempts to contact his people via a damaged communication device. Needing lactic fluid from a Sarasen, ‘Bobby’ is breast-fed by Doris in one of the weirdest and most disturbing moments I have ever encountered.

Doris’ beau Toby (played by author Anthony Keetch), is horrified to find that his love has fallen so far into madness. He also discovered that his stillborn child has been reshaped into another attraction, the cadaver sewn to the bottom half of a fish. Toby also sees an opportunity to gain substantial revenue from stealing both Doris and the Barnacled Baby from Jethro and hitting the road. Unknown to everyone, Demeris’ strength is returning, but he realizes that he must choose his moment of liberation carefully. A visit from Queen Victoria produces the ideal moment… but not in a way that anyone could predict.

The Barnacled Baby is a dark and twisted story of human depravity and the horror of everyday suffering and desperation. The Zygon himself is surrounded by such spine-tingling characters that when he finally shows his hand, it’s the pinnacle of the gory tale.

On screen, the Zygons remain one of the spookiest and most striking of Doctor Who monsters, despite having only appeared once. One may think that their ability to shape-shift would form the backbone of this story, but it is rather their monstrous appearance and dedication to dominate all others that marks the Zygons here.

Barnacled Baby is one of several audio releases by BBV, a production company headed by Bill Baggs that followed the Doctor Who legacy after Survival aired in 1989. From video production as grand as the Zero Imperative that starred almost every living actor and actress to ever work in Who to small audio projects such as this, BBV was an innovative and bold company that paved the way to the future. By taking public domain monsters such as the Autons, Krynoid and Wirrn, BBV was able to further develop the mythology of Doctor Who without stepping on any very prominent legal toes.

Author Anthony Keetch has some lovely behind the scenes images at his personal site along with samples.

The cast and crew are top notch and the script is polished. Alongside the regular cast members is Deborah Watling (one time companion Victoria) playing the Queen and other character parts and she’s a real treasure.

Obtaining a copy of this story is not easy by any stretch, but Bill Baggs has been selling reference copies of the deleted audio catalog on ebay here. If you have a strong stomach and are interested in a more horrific and grim adaptation of the Doctor Who universe, it’s worth listening to.

It can also be ordered from Mike’s Comics.

The Stuff of Nightmares

By Paul Magrs
Released 3 September 2009
“This was how the dead came stealing in. Pad-pad-pad on stuffing-filled limbs.”

Mike Yates had retired and thought that his days of adventure were behind him. His time as a Captain in U.N.I.T. were exciting, but so long ago. When a job posting surfaced for a man with experience with giant maggots and other strange phenomena, he let his curiosity get the better of him and investigated.

Mike finds his old friend the Doctor not looking a day older than the last moment they had met, living in a cottage in the country. Somewhat strange and distracted, the Doctor is anxious for company and has a tale to tell. He pleads for Yates to stay with him as a companion as he fears that he is losing a battle with forces too horrible to imagine.

That night, Mike is awakened by a beast in his bedroom. The Doctor arrives and hypnotizes it to sleep. Only then does Mike realize that the creature is actually long dead and stuffed. The Doctor has filled his cottage with stuffed animals, all of which are controlled by an alien intelligence, kept in check by the Doctor’s force of will.

What follows is an extensive narrative in which the Doctor unravels a yarn of high adventure, strange characters and creatures with origami brains driven by alien hornets. It’s a marvelously inventive script and caters to the elderly Baker’s colorful and witty personality. Far more bubbly and charismatic than he was on television, this is a very different, somewhat deranged version of the Doctor than we are used to (even by Baker’s extraordinary standards!).

Though unrelated to Big Finish, Tom Baker’s return to Doctor Who through this BBC Audio project was a major turning point for fans and pointed the way toward the actor’s eventual return to the scarf that still fits so well. The format is entirely different and relies entirely on the storytelling ability of Tom Baker, Richard Franklin and the superb Susan Jameson who voices the shrewd housemaid Mrs Wibbsey. However, Daniel Hill does fly into the camp stratosphere with his characterization of the villainous Percy Noggins, but to be honest I can’t see any other way he could have been played. 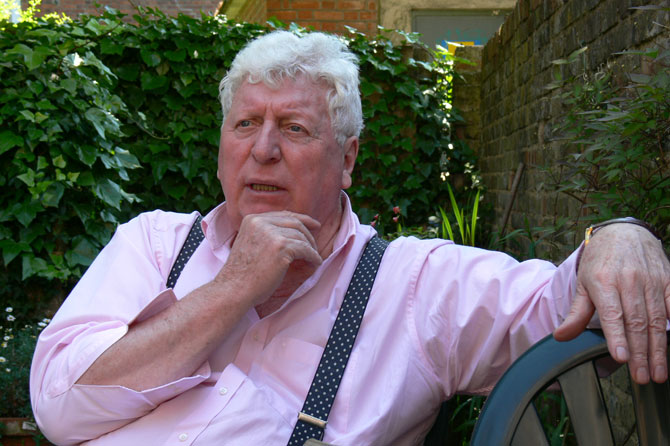 I must admit that I was quite put off by Hornet’s Nest on first listen. I had grown familiar with the Big Finish style of drama and a straight narrative held no interest for me, even when it was Tom Baker’s deep tones. But after that initial shock passed, it grew on me. It’s very different, of a far lighter material than most Who, and certainly cut from a different cloth than the Big Finish Productions.

Hornet’s Nest is told over several parts (five in all) and consists of a lot of chatting over tea or spirits in the Doctor’s cottage. It’s an odd way to tell an adventure, but very British as well, I suppose. For what it is, I really do enjoy these stories and their absurd comedic quality is appreciated.

Your mileage may vary, of course.

Available from Amazon and Mike’s Comics.

Read other Big Finish/BBC Audio reviews at the Daily P.O.P.