Series 6
Episode 9
Transmitted  3 September, 2011
“I’ve come a long way to get here, Alex. George sent a message. A distress call, if you like. Whatever’s inside that cupboard is so terrible, so powerful that it amplified the fears of an ordinary little boy across all the barriers of time and space. Through crimson stars and silent stars and tumbling nebulas like oceans set on fire. Empires of glass and civilisations of pure thought and a whole, terrible, wonderful universe of impossibilities. You see these eyes? They’re old eyes. And one thing I can tell you Alex, monsters are real.”

A little boy shivers in his bed, freakishly horrified by the sound of the lift outside his room, the witch that lives across the hall and the monsters in his cupboard. His mum flicks the light on and off five times and he recites his special saying three times but it seems that no one can make the monsters go away. A desperate plea for help reaches the TARDIS in deep space, outside of time itself. Recognizing that to reach him through such unlikely means would require phenomenal power, the Doctor takes his crew to the scariest place in the universe, a little boy’s bedroom.

Steven Moffat’s take on Doctor Who contains several concepts that have to be accepted by the viewer straight away. Just to select a few; the Doctor is a folk hero, Doctor Who is a fairy tale, and each episode MUST feature monsters or some wacky visual idea. Taking all of that into consideration, this episode is quite good. It has some flaws, such as the moment when Alex stares at his son and demands’ What are you?’ (never a good parenting choice, mate), the fact that the concept of adoption is regarded as entirely alien and that Mark Gattis seems unfamiliar with how children’s literature works… but given the fact that last week’s installment was a dire flurry of plot threads and explosions, this is a vast improvement. 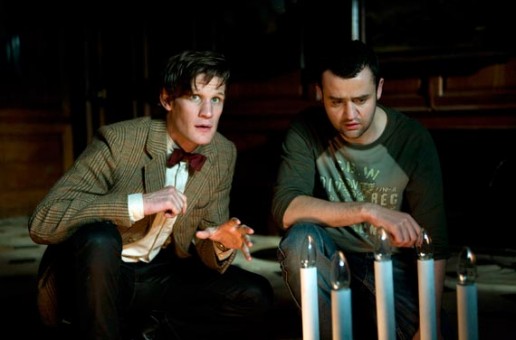 The Doctor, Rory and Amy arrive at a creepy looking council estate (no Rose Tyler, thankfully) to answer a summons from a scared little boy named George. The boy’s parents are out of their depth in dealing with the eight year-old’s numerous anxious behaviors, so much so that when a mysterious stranger arrives to help he is accepted in face value. In fact, the psychic paper gag was hardly needed here.

While the Doctor attempts to get to the bottom of George’s fears, Rory and Amy get sucked into another realm via the lift that terrifies George every day and night. Waking up in a seemingly deserted house, they are confused by little idiosyncrasies that make the house seem unreal. When they are hunted through the house by creepy giggling doll creatures, the mystery is forgotten and the situation becomes less about investigation and more about survival.

Back in the flat, the Doctor tries to bond with George and gain Alex’s trust only to discover that the cupboard that little George has placed all of his fears in is in fact full of actual monsters. Terrified by an ‘off the scale reading’ (of what?? monsters??) on his sonic screwdriver, the Doctor is torn over whether to open the cupboard or not. After a quick cup of tea, he decides to through caution to the wind and ends up getting himself and Alex sucked inside. Well, 900 plus years does not make one a pragmatist, does it? 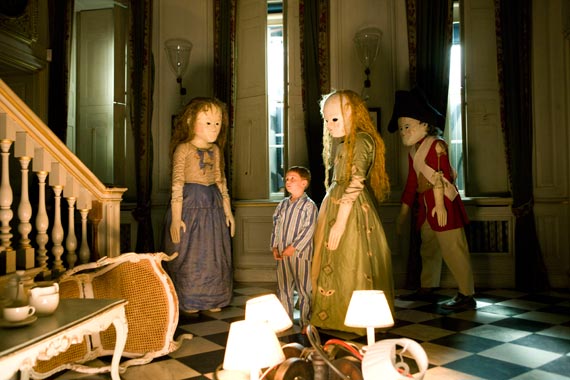 Inside the dollhouse, the Doctor explains that George is not a child born from Alex and his wife Claire (something that horrifies Alex but must make any adopted kids watching- this is still considered family entertainment in the UK- even more scared) but is in fact a cuckoo from the stars. An alien creature from space heard Alex and Claire’s need for a child and delivered one to their doorstep. Using a perception filter to mask the charade (how? it’s magic, I guess), George was seemingly accepted into the family… if not for his odd fears.

This is kind of where the story encounters a massive stumbling block as George’s fears stem from Alex and Claire fearing their own abilities as parents and considering having their son taken away to someone better suited to handle his needs. However, if his fear was caused by this possibility, how could it also be the cause of Alex and Claire’s wanting to have him taken away? It makes no sense. The cause of a situation cannot also be the effect, surely.

In any case, George has been taking every little fear and scary concept he has encountered and shut it away inside his cupboard using some weird alien psychic ability that also causes people to be turned into creepy dolls that haunt the confines of the dollhouse. Again, it doesn’t really make sense, but it does allow for some interesting visuals and that is where this episode excels. 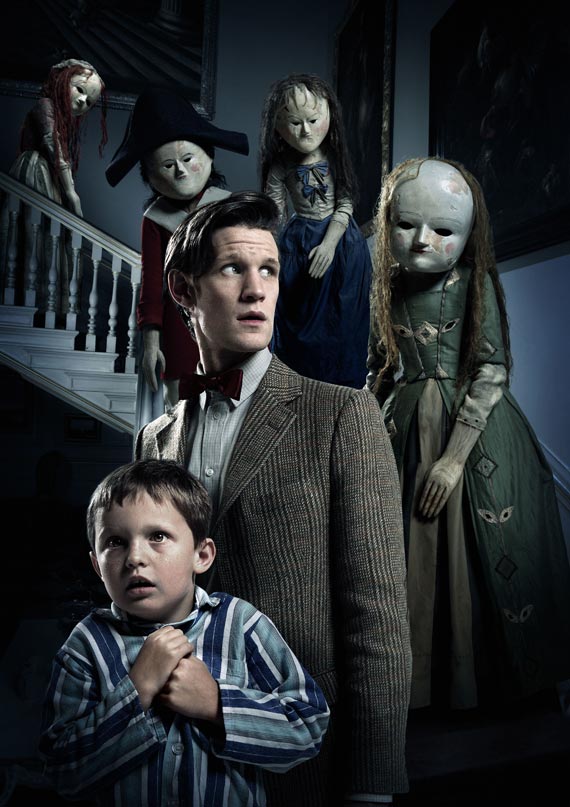 The latest episode of the sixth series pays homage to Sapphire and Steel, and many vintage horror films. Mark Gatiss is a traditionalist and his scripts to date work on that approach. A fan of the Troughton and Pertwee eras, he is most concerned with making an indelible mark with each of his stories and this one accomplishes that as being ‘the one with the creepy dolls.’ The plot is a bit flimsy and the logic strained, but there is a story here and it does manage to hold together and function as a fantastic fairy tale with the Doctor acting as a folk hero who fights monsters.

The conclusion involving Alex accepting his son as his own (even though he isn’t, but never mind) is very sappy. I have a young rambunctious and adorable child of my own, but I know when I’m being manipulated by a TV program and I don’t like it. Additionally, the mother’s acceptance of the Doctor’s solution is laughably absurd. Why would she not worry about her son’s problems and question why they suddenly went away? Like a few other aspects of this episode, it makes no sense.

The direction was, on the whole, top notch and working with most of the story set in nearly complete darkness, it still fired on all cylinders. The combination of the every day and the fantastic (another obsession of the BBC Wales Doctor Who) also worked this time around and didn’t feel hokey or forced. The regulars were in fine form with Arthur Darvill as Rory being both sympathetic and amusing all at once. Matt Smith once again proves that he is an ideal choice for Moffat’s Doctor, a being that is weird yet human, dashing yet scatter-brained and silly yet serious.

All in all, a step in the right direction with the only definite stumble being the inclusion of the ‘Doctor’s death’ plot thread at the end. Oh well, can’t win ’em all.

Next Time: The Girl Who Waited

6 thoughts on “Doctor Who – Night Terrors”