It’s been a long, strange trip for the hero who began life as one of the “mysterious, shadowy characters” that were de rigueur during the tortured 1990’s era of comicbook storytelling.  And now that journey appears to have reached its apex, a mere 16 years after it began.  So, who is Kaine and why has he left such an indelible impression on this fan and writer?  Perhaps most importantly, why was “Grim Hunt,” the capper to the last year’s worth of stories labeled “The Gauntlet” in THE AMAZING SPIDER-MAN, the perfect place for his finest hour?  Alas, you ask the most interesting questions…

I make no secret that a pretty big reason for my love of Spider-Man is the storytelling of J.M. DeMatteis, a writer prolific at Marvel Comics from the late 1970s through the mid-1990s, who worked on projects like THE DEFENDERS and MARVEL TEAM-UP in the early days, onward through creator-owned projects like BLOOD and MOONSHADOW in the middle part of his career, and finally a major resurgence on the character with whom he’s most often associated, beginning with the story to which “Grim Hunt” serves as sequel, “Kraven’s Last Hunt.” Although it took a while, DeMatteis became regular writer of SPECTACULAR SPIDER-MAN with artist Sal Buscema, creating virtually every major clash between Peter Parker and Harry Osborn as the second Green Goblin (including the superb “The Child Within” in issues #178-184, which I own in a German collected edition, and Harry’s “death” in #200).  He created the more poignant issues of the abominable crossover “Maximum Carnage,” and then he moved over to AMAZING SPIDER-MAN, the flagship title, just in time for the “Clone Saga,” the longest, most complicated storyline in the entire history of the character–the one everyone’s got an opinion about.

Although first featured in books written by Howard Mackie and Terry Kavanagh (first appearing in WEB OF SPIDER-MAN #119), Kaine really rose to prominence under DeMatteis’ skillful pen.  He began as a shadowy, long-haired, muscular character in black outfit and pink cape (a neat trick if you can pull off the look) who pursued the newly-returned Spider-Clone, Ben Reilly.  He clearly carried a grudge established at some point during Ben’s five years on the road.  Then our Peter was arrested and charged with the murder of Louise Kennedy, the partner of obsessed Salt Lake City police detective Jacob Raven, three years prior.  (The reason for Peter’s lack of alibi?  He was buried alive by Kraven the Hunter, in “Kraven’s Last Hunt,” that DeMatteis nugget that keeps giving.)  Herein it was revealed that the reason why Kaine’s fingerprints matched Peter’s was that he was Peter’s first, failed clone.  His powers–his precognitive sense and the “mark of Kaine,” a burning mark that left permanent scars on his victims–were greatly mutated versions of Spider-Man’s own (his spider-sense and wall-crawling ability, respectively).  His aims were complex: as we initially thought that he hated Ben for being the “perfect clone,” we soon discovered that he believed, as did the Jackal, that Ben was the real Peter Parker!  Hence, Kaine was protecting his “brother,” the perfect clone, from having his perfect life interrupted by the return of the original deal.

Kaine went from the enigmatic character who began killing off Spider-Man’s foes in order to potentially stave off the death of Mary Jane Watson-Parker, to the failed Spider-Clone protecting his “perfect” brother’s legacy.  He succumbed to death at the hands of yet another Spider-Clone (Spidercide…where is he, anyway?), only to be brought back and dropped into the middle of “The Great Game,” a competition in which various wealthy “sponsors” placed bets on the outcomes of battles between various superhumans.  He seemed to be getting away from his main purpose, but at least his antagonism with Ben Reilly was preserved.

J.M. DeMatteis perfectly captured the character of Kaine in SPIDER-MAN: THE LOST YEARS, which detailed the events leading to the death of which Peter had been accused, and its sequel, SPIDER-MAN: REDEMPTION, which took place in the present-day and featured Ben Reilly as Spider-Man.  Of course, Marvel then reversed its decision to have Ben be the one, true Spider-Man, so Ben died and Kaine was relegated to the deepest, darkest corners of the Marvel Universe, appearing in a THUNDERBOLTS annual here and an issue or two of AMAZING SPIDER-MAN there.  He even became a semi-regular cast member in Tom DeFalco’s MC2 series, SPIDER-GIRL (which itself is wrapping up a momentous run in August, one that lasted through five consecutive titles).

Honestly, after 13 years of only seeing him in alternate universe stories, I never thought we’d find a writer with the cojones to return Kaine to the pages of AMAZING SPIDER-MAN, but that’s what we got in writer Marc Guggenheim, who penned the 3-part storyline “Who Was Ben Reilly?” in issues #608-610 last year.  Marc may not have mined especially new territory with the story’s main thrust (the ‘mistaken identity’ issue had already been played out in the remarkably similar “Trial of Peter Parker” storyline I outlined above), but the important thing was that Kaine was once again visible on the playing field, and it was only a matter of time before someone used him again.  I guess I really should have been careful what I wished for. 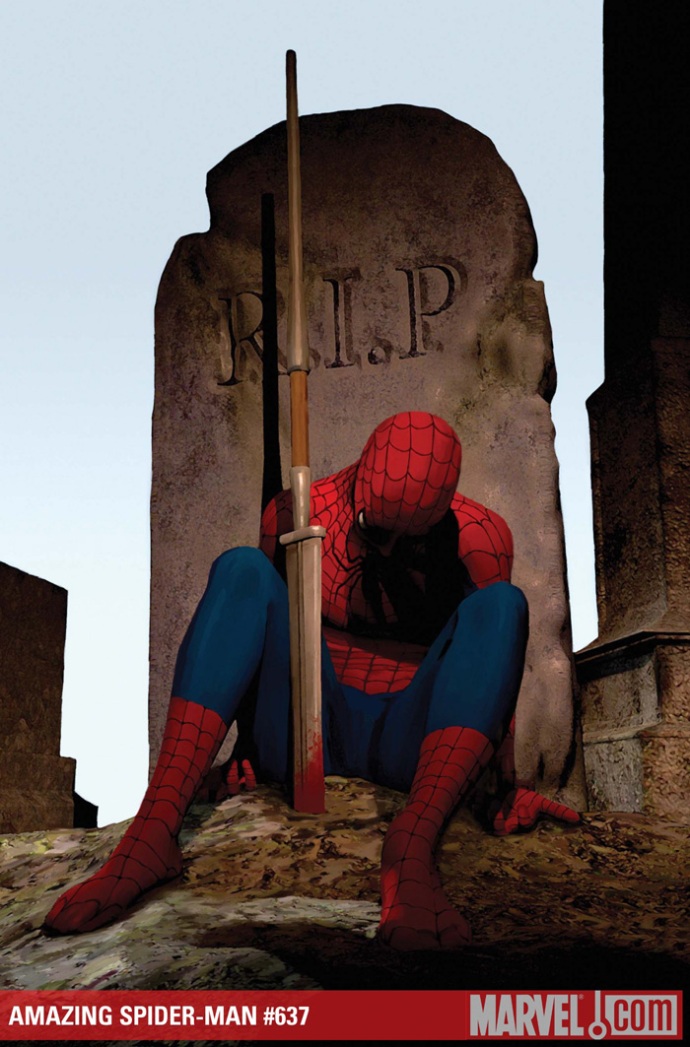 “Grim Hunt” began a few weeks ago in AMAZING SPIDER-MAN #634 and continued through this week’s issue #637.  For those who haven’t read the finale, let’s just say that thanks to writer Joe Kelly, the failed clone of Peter Parker who spent more than a bit of his failed existence hating the wrong man finally redeemed himself.  And in all this month’s tales, we even saw J.M. DeMatteis return for one (last?) go-round with Kaine, in a tale exploring a heretofore unrevealed antagonism between Kaine and Kraven, which may just explain why he was so hell-bent on killing his son Vladimir (the Grim Hunter, way back in SPIDER-MAN #55…see how it all fits together?).  And ironically, this time, Kaine ended up wearing the very colors that, in some other life, he might have been born to wear.

I’m sorry, am I spoiling too much?  I know “Grim Hunt” is supposed to be all about Kraven and his family, and how they’re killing all the “spiders” of the Marvel Universe.  But I love that this storyline’s been substantially about Kaine.  I hope some of my infectious enthusiasm rubs off on you.

Go, pick up these books already.  Tell ’em the guy who’ll be digging up Kaine again in a few short years for the series of a lifetime sent you.

Spider-Man: Return of the Black Cat

3 thoughts on “Kaine Always Wanted to be Like His Brother, But He Just Wasn’t…Spidey?”